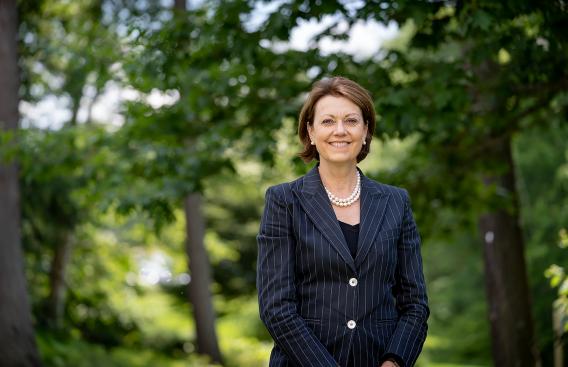 With this brand-new podcast, we hope to inspire and expand on the national conversation surrounding the vision of female leadership in the ever-growing health care space.

Joanne M. Conroy, MD, CEO and President of Dartmouth-Hitchcock and Dartmouth-Hitchcock Health (D-HH), has partnered with health care leadership group Think Medium on Her Story – Envisioning the Leadership Possibilities in Healthcare. The audio/video podcast, which features a new female leader as its host each month, is developed by and for women in health care leadership. To date, Her Story has covered important topics such as women in the boardroom, launching a successful brand, rising above stereotypes, bridging education and delivery, and closing the racial and ethnic wealth gap.

“Challenges in our careers are not failures, rather they are opportunities to rethink and reset,” said Conroy. “With this brand-new podcast, we hope to inspire and expand on the national conversation surrounding the vision of female leadership in the ever-growing health care space.”

First, Conroy will appear as a guest with host Lynne Chou O'Keefe, Founder and Managing Partner of Define Ventures on Monday, January 4, 2021. O’Keefe will then pass the hosting duties to Conroy with her first episode as a host on January 6, featuring guest Kim A. Keck, current President and CEO of Blue Cross & Blue Shield of Rhode Island and the incoming president and CEO of Blue Cross & Blue Shield Association. Episodes will be released once a week throughout the month of January, and will include the following guests: Terry Fulmer, PhD, RN, FAAN, President and CEO of The John A. Hartford Foundation; Lisa David, President and CEO of Public Health Solutions and former Chief Operating Officer of Planned Parenthood; and Coleen Kivlahan, MD, MSPH, Professor, Family Community Medicine.

“Her Story podcast is designed for and about women leaders in health care,” said Gary Bisbee, PhD, co-Founder, chairman and CEO of Think Medium. “It is intended to expand women’s leadership vision of what is possible. In partnership with Dr. Conroy and her fellow Advisory Council members, we have created Her Story to reach out to women at all leadership levels to broaden their perspectives through exposure to successful women leaders.”

Dartmouth-Hitchcock Health (D-HH), New Hampshire’s only academic health system and the state’s largest private employer, serves a population of 1.9 million across northern New England. D-HH provides access to more than 2,000 providers in almost every area of medicine, delivering care at its flagship hospital, Dartmouth-Hitchcock Medical Center (DHMC) in Lebanon, NH. DHMC was named again in 2020 as the #1 hospital in New Hampshire by U.S. News & World Report, and recognized for high performance in 9 clinical specialties and procedures. Dartmouth-Hitchcock Health includes the Norris Cotton Cancer Center, one of only 51 NCI-designated Comprehensive Cancer Centers in the nation; Children's Hospital at Dartmouth-Hitchcock, the state’s only children’s hospital; member hospitals in Lebanon, Keene, and New London, NH, and Windsor, VT, and Visiting Nurse and Hospice for Vermont and New Hampshire; and 24 Dartmouth-Hitchcock clinics that provide ambulatory services across New Hampshire and Vermont. The D-HH system trains nearly 400 residents and fellows annually, and performs world-class research, in partnership with the Geisel School of Medicine at Dartmouth and the White River Junction VA Medical Center in White River Junction, VT.