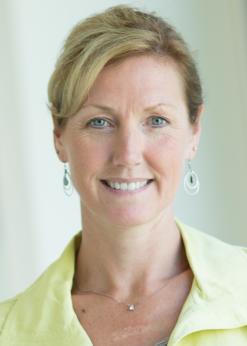 Karen F. Clements, BSN, MSB, MHCDS, RN, FACHE, has been the Chief Nursing Officer of Dartmouth Hitchcock Medical Center since June of 2016. She joined Dartmouth Hitchcock Medical Center in July of 2013 and has held several pivotal roles within the medical center focusing on quality, patient and staff engagement, patient throughput and elevating the role of the nurse leader. Over the past several years, Clements has been a primary developer of projects such as nursing re-design, Regional Patient Placement and Transfer Center, creation of an Emergency Services Line, and has re-defined nursing practice in the ambulatory and primary care setting. Clements has developed and implemented the System Staffing Office that enhances the current workforce with a highly qualified per diem staffing pool to support the care of patients in the region. She is a Fellow of the American College of Healthcare Executives (ACHE), the ACHE Governor, the past Regent for New Hampshire and the past President of the Northern New England Chapter. She also serves the community as the Past-president of the Lebanon-Riverside Rotary Club in Lebanon, New Hampshire.

Before coming to Dartmouth Hitchcock Medical Center, Clements worked with Eastern Maine Healthcare Systems (EMHS) in Bangor, Maine, for 23 years. Initially, she worked with Eastern Maine Medical Center as the Nurse Manager of the Emergency Department, Trauma and Urgent Care, then as the Administrative Director of several service lines to include: Emergency, Trauma, LifeFlight, ICU, Telemedicine and Inpatient/Outpatient Rehabilitation. During her final three years at EMHS, Clements was the Chief Nursing Officer/VP of Patient Care Services of The Acadia Hospital, the only Magnet-certified free-standing Psychiatric Hospital in the country. Clements also proudly served in the U.S. Army Nurse Corps from 1988 to 1999.

Clements graduated from University Of Maine's School of Nursing with her Bachelor of Science in Nursing, Husson University in Bangor, ME, with a Masters in Business; and Dartmouth College with a Master in Healthcare Delivery Science.

She and her husband, Peter, keep very busy with their four children, Kayle, Jonathan, Ava and Gillian, and their three grandchildren, Kenley, Noah and Jolene. In her free time, Clements enjoys cooking, traveling, and many outdoor activities with her friends and family.