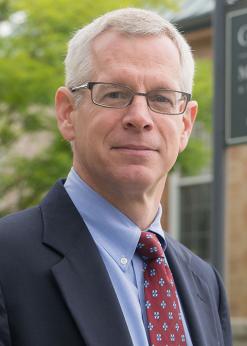 Duane Compton, PhD, professor of Biochemistry and senior associate Dean for Research, was named Dean of Dartmouth's Geisel School of Medicine on April 5, 2017. In this position, he plays a key role in strengthening collaborations with Dartmouth College, the Thayer and Tuck Schools, Dartmouth-Hitchcock and the White River Junction VA Medical Center to enhance cross-institutional, interdisciplinary research. Compton had previously been interim dean of Geisel for almost three years, during which time he was responsible for guiding a complex reorganization of the medical school.

Before becoming interim dean, Compton served as senior associate dean for research at Geisel. He has also held the positions of associate director for basic sciences and director of the Cancer Mechanisms Program at the Norris Cotton Cancer Center. An internationally renowned cell and cancer biologist, he was recruited to the faculty at Dartmouth in 1993. Since his arrival, he has maintained a continuous record of funding through the National Institutes of Health (NIH), as well as many private foundations. In 2013, he received an NIH MERIT Award in recognition of his research on the mechanisms of chromosome segregation during cell division. MERIT awards recognize researchers who have demonstrated superior competence and outstanding productivity in research endeavors. Compton has published more than 70 articles, and images of his work have been displayed on the cover of 15 scientific journals.

Compton is an elected fellow of the American Association for the Advancement of Science and has served on more than a dozen national committees, including at the NIH and the American Cancer Society. He has been honored for his work at Geisel, receiving awards for mentorship and teaching. In 2012, he was elected a member of school's Academy of Master Faculty Educators.

Compton's commitment to education is evident in the many undergraduate medical courses he has taught, as well as the broad spectrum of trainees he's mentored over the years, including undergraduate, PhD, and MD/PhD students and postdoctoral fellows. He has graduated 15 PhD students, mentored two post-doctoral trainees and served on committees for more than 50 graduate students.

Compton received his PhD from the University of Texas Health Science Center at Houston and completed his postdoctoral training in cell biology at the Johns Hopkins University School of Medicine.