Surgeon-in-Chief, John Hopkins Hospital and the William Stewart Halstead Professor of Surgery and Director of the Department of Surgery at the Johns Hopkins University School of Medicine 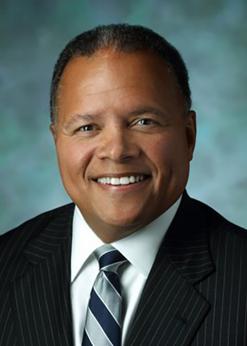 Robert S.D. Higgins, MD, MSHA is the surgeon-in-chief of the John Hopkins Hospital. He is a leading authority in heart and lung transplantation, minimally invasive cardiac surgery, and mechanical circulatory support. His scientific interests are broad and far-ranging, including the mechanisms of cell injury in failing hearts, health economics and policy, racial disparities in post-transplant outcomes, access to care and improving outcomes among heart failure and cardiac surgery patients. Dr. Higgins is also the William Stewart Halstead Professor of Surgery and director of the Department of Surgery at the Johns Hopkins University School of Medicine.

Dr. Higgins obtained his bachelor's degree from Dartmouth College and went on to earn his medical degree from the Yale School of Medicine, followed by a master's degree in health services administration at Virginia Commonwealth University. He completed a residency in general surgery and served as chief resident at the University Hospitals of Pittsburgh. He was a Winchester Scholar and fellow in cardiothoracic surgery at the Yale School of Medicine. He also served as a Major in the United States Army Reserve Medical Corps.

Dr. Higgins has held leadership positions at various organizations, including president of the United Network for Organ Sharing, president of the Society of Black Academic Surgeons, and president and founding member of the Association of Black Cardiovascular and Thoracic Surgeons. He has also been appointed to the Advisory Committee on Organ Transplantation by the Secretary of the Department of Health and Human Services. He has authored over 100 scientific articles and book chapters.