Home / For Patients & Visitors / D-H Stories / Our Patients. Their Stories. Philip Raymond
In This Section

Our Patients. Their Stories. Philip Raymond 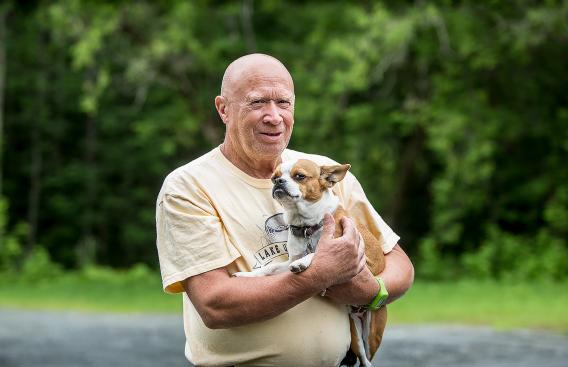 I'm helping him learn how to live with it, because being in denial isn't going to help anybody.

Philip Raymond, 72, of Lebanon, NH, was two years into retirement, recalls his wife Stephanie, when she started taking notice of small, unusual incidents.

One morning, Philip had driven to their daughter’s house just a few minutes down the road, to feed her family’s pets while they were away. “But he was gone for about 45 minutes,” Stephanie says. “When he finally came home, he said he’d been sitting in the school parking lot trying to remember where he was going and what he was supposed to do.”

Another time Philip went to Walmart to pick up his son’s prescription at the pharmacy and forgot what he had gone there to do and wandered the store trying to remember. The sign for the pharmacy finally jogged his memory, but he couldn’t remember his son’s name when asked.

“It was scary,” Philip remembers. “It’s strange when you can’t remember your own child’s name.”

“I’m just glad he has the presence of mind to call me when these things happen,” says Stephanie.

As she tracked the increasing regularity of these episodes, Stephanie finally recommended that they bring it up with their family physician, who performed a cognitive exam on Philip and ordered a magnetic resonance imaging (MRI). When those results were less than conclusive, the physician referred him to Aleksandra Stark, MD, in Neurology at Dartmouth-Hitchcock (D-H).

Philip knew this day might come—to have to learn that what he was experiencing was, in fact, Alzheimer’s disease. He knew a number of family members, generations deep, who had either been diagnosed with Alzheimer’s or had experienced varying degrees of memory loss.

One of the first things Stark recommended was a spinal tap, a procedure to collect and analyze spinal fluid around the brain and spinal cord to test for biomarkers of Alzheimer’s disease.

With a diagnosis of Alzheimer’s, Stark prescribed Aricept, a medication that, while not a cure, can slow down the effects of Alzheimer’s, possibly improving memory, awareness and ability to function. “Although there are good days and bad days,” Stephanie says, “I really think Aricept has made a difference.”

Philip and Stephanie are grateful, for Stark’s thorough attention to all of their questions and concerns. “She has such a great personality,” Philip says. “And funny, too, which reminds me of me. She told me the way to remember her name is to think ‘Stark raving mad!’”

Philip’s upbeat spirit and good-natured sense of humor have helped their family cope with the emotional challenges of his condition. “He’s a real cut-up,” Stephanie says. “Sometimes he plays with us and pretends he doesn’t know the directions to someplace. He likes to take advantage of his situation!”

Philip doesn’t deny the challenges of moving through life with an understanding of his limitations. “Sometimes little things are the worst,” he says. “Stuff that I would normally just go and do, now I have to think about first.”

Stephanie creates “visual cues” to guide him through some daily routines to help reduce some of his frustration and anxiety. The cat food cans, for example, are lined up on a shelf and labeled for each day. “I’m trying to help him learn how to live with it,” she says, “because being in denial isn’t going to help anybody.”

“Face it,” Philip says when asked for his advice to others who may come to share his experience with Alzheimer’s. “Just look life in the face and take it as it comes. You never know what the day is going to bring.”

Our Patients. Their Stories. Philip Raymond