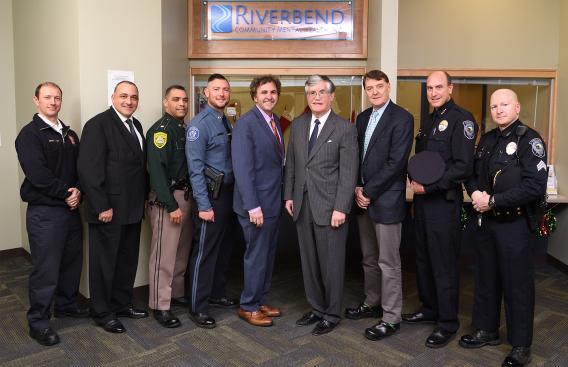 We are delighted to have the opportunity to help the police and many New Hampshire residents who might not know where to look for help.

REACT focuses attention on changing the stigma of mental illness. Dartmouth-Hitchcock and the New Hampshire Department of Education joined together last year to create REACT, an awareness campaign that includes tips, resources, and support to deal with the five signs of emotional suffering: agitation, personality change, poor self-care, withdrawal, and hopelessness. Originally created for use in schools, REACT is an acronym to Recognize the signs, Express concern, Act now and talk to someone you trust, Care enough to follow through and follow up, and Text “signs” to 741-741.

“These REACT cards will be a great tool, because they contain succinct contact information on where mental health and substance misuse services can be found,” said Londonderry Police Captain Patrick Cheetham, speaking for the NH Police Association. “Directing people to the help they need when they need it will ease a lot of suffering and keep officers safer. Everyone wins.”

The REACT resource cards will be available at all State Police barracks throughout New Hampshire, as well as at the police stations in Londonderry, Manchester, and Concord and at Riverbend Community Mental Health’s offices in Concord. They will most often be used by police in the field, however. New Hampshire Public Safety Commissioner John Barthelmes echoed his support for the resource cards: “These cards fill a real need for our officers in the field. They are a welcomed resource and we are grateful to have them,” Barthelmes said.

John Broderick, Senior Director of External Affairs at Dartmouth-Hitchcock and former Chief Justice of the NH Supreme Court, said the cards were a valuable next step to Dartmouth-Hitchcock’s statewide campaign to increase knowledge and awareness around mental health and to reduce stigma.

“We are delighted to have the opportunity to help the police and many New Hampshire residents who might not know where to look for help,” Broderick said. Tom Raffio, CEO of Northeast Delta Dental, added that he and his company are proud to be a part of the initiative. “Mental health, like oral health, is an important part of overall health, and our police officers often encounter people in need of mental health and substance misuse services who don’t know where to turn.”