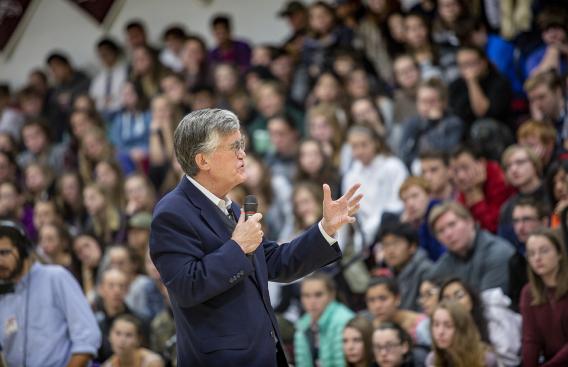 John Broderick is the Senior Director of External Affairs for Dartmouth-Hitchcock Health, and has a distinguished legal background that includes serving as Chief Justice of the New Hampshire Supreme Court.

But over the past two-and-a-half years he has stood before more than 70,000 students in more than 80 New Hampshire and Vermont high schools – where he is simply John Broderick, father and husband, who has a story to share and a challenge to issue: Change the conversation on mental health.

A new short documentary, produced by Dartmouth-Hitchcock's Creative Productions team, tells the story of Broderick’s family’s struggles with mental illness – struggles that, in 2002, led to an assault by his eldest son that nearly cost Broderick his life, and sent his son to prison.

While in prison, his son was diagnosed with depression and anxiety, and the Brodericks came to the realization that mental illness had been there all along. They saw their son’s alcohol abuse, but it was the depression, anxiety and sheer panic that afflicted him. In prison, he received treatment and medication, and the family began to mend.

In early 2016, Broderick decided to bring his family’s story into the light as the chairman of “Change Direction NH.” From there he created his own initiative, now sponsored by Dartmouth-Hitchcock Health, called REACT, a campaign to educate people on the signs of mental illness and how to help (themselves or someone else), in an effort to end the social stigma of mental illness.

Broderick is relentless in his efforts. He calls it “the most important work I have ever done.” To spread this message, he has driven more than 25,000 miles annually to give more than 175 presentations, speaking to more than 35,000 students annually.

Learn more about REACT and John Broderick's mission with this media kit. If you are interested in having him present to your organization, please contact Karen Borgstrom at Karen.J.Borgstrom@hitchcock.org.