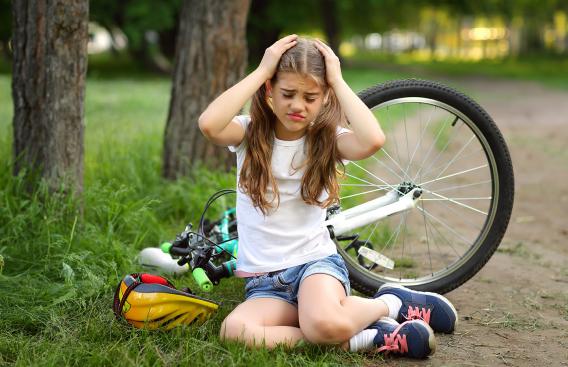 In 2014, there were over 837,000 traumatic brain injuries (TBI) among children, according to the Centers for Disease Control and Prevention (CDC). Concussion is the most common form of TBI and can result from a fall, a car accident that causes whiplash or a blow to the head during a contact sport. When we look at concussion rates in youth sports, football is still at the top. Although the American Academy of Pediatrics (AAP) recommends that children should not body check in hockey until age 15, it doesn’t make age-related recommendations for football. I personally advise waiting until high school to play tackle football.

For the early part of my career as a pediatrician, concussions were treated as minor injuries. But fortunately the first two International Consensus Statements on Concussion in Sport in 2001 and 2004 changed our approach. We stopped grading concussions as level 1, 2, or 3, treating each child with a concussion as an individual, healing on their own terms. We also therefore debunked the “three strike rule”—the notion that your child can no longer play their chosen sport after sustaining three concussions. If each concussion has healed completely, your child can return to their sport or activity.

At the same time, we began prescribing “cocooning”—three to four days of rest in a dark room with no screens (phones, laptops or television). Children were kept out of school and activities were restricted, often for several weeks, because it was thought the concussion would heal faster. However, more recent research shows that we have been overly cautious in managing concussion patients, ultimately slowing their recovery time.

We have learned that children no longer need to be kept out of school for two to three weeks, but may return with appropriate modifications two or three days after the concussion occurs. They may also resume light physical activity, like brisk walks, that won't worsen their symptoms within two to three days.

What has not changed is that children should never return to sports on the same day they sustain a suspected concussion. They need to be cleared by a health care professional like a doctor, nurse practitioner, or certified athletic trainer before resuming strenuous physical activity.

While treatment has changed and concussions are not the devastating injury that has caused anxiety in many families, they are still serious. If managed properly, in most cases concussions will resolve over time and your child will have no lingering or long-term effects. To be safe, though, remind your child to always wear a helmet for sports where one is required and while riding a bike, skateboarding and skiing.

Click here to learn more about Dartmouth-Hitchcock’s Sports Concussion program or to make an appointment.

Keith Loud, MD, MSc, is the Physician-in-Chief, and an adolescent sports medicine specialist at the Children’s Hospital at Dartmouth-Hitchcock (CHaD).