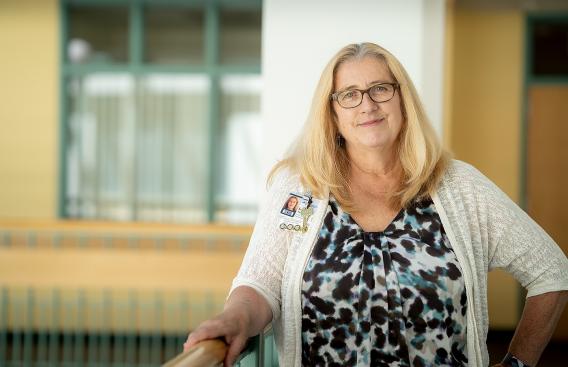 If you to want get back to a normal, healthy life prior to your AFib, have it done. I recommend it 100 percent.

For the past four years, Loriann Agan has suffered from atrial fibrillation (AFib), or an irregular heartbeat. “I would feel lightheaded and get this wave of dizziness and I’d feel short of breath,” says Agan, the supervisor of Dartmouth-Hitchcock’s (D-H) Transportation & Supply Chain Division. “My heart rate sometimes went up to 220 beats a minute, or it could go as low as 60 beats per minute. Sometimes this would last 20 minutes, other times it would last for hours.”

AFib is the most common chronic heart rhythm disorder and can lead to complications like blood clots, stroke and heart failure. Some of the signs of AFib are an irregular heartbeat that feels like a butterfly, a hummingbird, or a machine gun, decreased energy, diminished exercise tolerance and shortness of breath. “I couldn’t do stairs and I would get out of breath playing with my grandchildren on the floor,” says Agan. “I was in AFib three or four times a week, and I was probably at 30 percent of life’s capacity, as far as moving around. I was at the point where something needed to be done!"

Agan made an appointment with electrophysiologist Kevin F. Kwaku, MD, PhD, director of Cardiac Electrophysiology at D-H’s Heart and Vascular Center, who recommended cryoablation. Cryoablation uses extreme cold to freeze the heart tissue that causes an irregular heartbeat and is a technique that Kwaku introduced to D-H shortly after he joined the Cardiology section two years ago. Cryoablation is a newer alternative to radiofrequency ablation, which uses heat to disable the heart cells that create an irregular heartbeat. The procedure has also been adopted by Kwaku’s colleague Rajbir Sangha, MD. “Previously, we were only offering radiofrequency ablation at D-H to treat AFib invasively,” says Kwaku. “Cryoablation can be a slightly faster procedure, resulting in shorter anesthesia time for the patient.” Also, Kwaku felt it “important that our electrophysiology fellows become familiar with all the different modalities available to treat AFib."

Agan was initially nervous about undergoing cryoablation. But when her symptoms worsened last year, she decided to have Kwaku perform the procedure this past June. “One month after cryoablation, I was riding bicycles with my grandchild, hiking up in the mountains and doing everything that I did when I was in my 20s and 30s,” says Agan. “If you to want get back to a normal, healthy life prior to your AFib, have it done. I recommend it 100 percent.”

While Agan was a good candidate for cryoablation because her AFib was becoming more frequent, Kwaku notes that ablation is not the only solution for treating AFib. Electrical cardioversion, a procedure in which an electric current is used to shock or reset the heart’s rhythm, is often used to return a heartbeat to a normal rhythm. “For someone who has infrequent symptoms, cardioversion is often a good treatment,” says Kwaku. “But it does not keep AFib from recurring, so we are likely to see those patients return in the future as their AFib recurs."

Antiarrhythmic drugs are another option, which frequently require a 72-hour hospitalization when patients start them. “Some people don't like the idea of taking a pill every day and others don't like the idea of me putting a catheter in their heart and burning or freezing things, so it comes down to personal preference,” says Kwaku. “While medications are appropriate for many patients, all the trials that have looked at efficacy, meaning likelihood of AFib recurrence within a year or two, have found that cryo or radiofrequency ablation ultimately perform better than drugs."

“The purpose of AFib treatment is the elimination of symptoms,” says Kwaku. “For a portion of the population, we’re trying to eliminate the risk of them developing a weak heart or cardiomyopathy. Sometimes people’s heart rate in AFib will remain greater than 100 beats per minute, day and night. If your heart is going too fast for too long, it can literally wear out."

“Stroke prevention, or reducing the risk of stroke, is also something we emphasize in treatment since AFib increases the risk of stroke fivefold. For many people, although not all, that may require blood thinning medications."

Lifestyle changes can be powerful for minimizing AFib episodes. These include maintaining a healthy weight, treating sleep apnea with CPAP (continuous positive airway pressure), controlling hypertension, quitting smoking (including marijuana) and minimizing or eliminating alcohol use.

“It’s definitely important to address these modifiable or ‘lifestyle’ risk factors, and to take your antiarrhythmic and anticoagulant medications as prescribed,” says Kwaku. “And, if your AFib doesn’t improve, get referred to a cardiac electrophysiologist and learn whether an ablation is right for you.”