Home / For Patients & Visitors / D-H Stories / Our Patients. Their Stories. Jonathan Glass, MD
In This Section 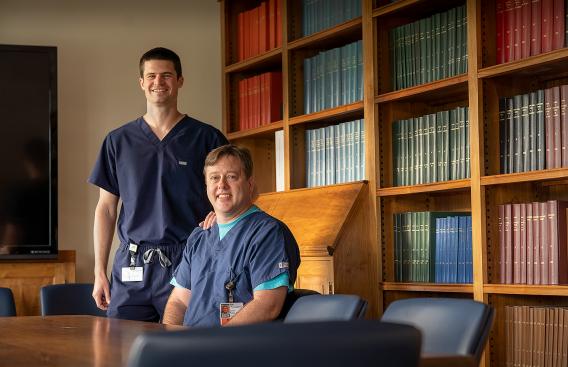 Growing up in Texas, Dartmouth-Hitchcock (D-H) Dermatologist Jonathan Glass, MD, spent a lot of time in the sun. “I worked as a lifeguard in high school and my mom was a dermatologist, so she was not happy about my job,” says the Dallas native. “She would tell me to wear sunscreen, but we didn't have the same strength of sunscreen that we do now. Even so, I didn’t use sunscreen as regularly as I was instructed to—I was just happy to get a tan.”

Knowing that skin cancer was a possibility after all his years of sun exposure, Glass performed regular skin checks on himself. When a suspicious looking red, firm bump appeared on the tip of his nose in early 2019, he asked his colleagues to examine it. They agreed that it appeared to be skin cancer. D-H Dermatologist and Mohs surgeon Matthew R. LeBoeuf, MD, PhD, advised Glass that Mohs surgery was the best course of action and surgery confirmed the lesion was squamous cell carcinoma.

A Mohs procedure involves surgically removing skin cancer, layer by layer, and examining the tissue under a microscope until only cancer-free tissue is reached, which is called clear margins. These steps are repeated until the skin tissue is free of cancer. “Mohs surgery is the standard of care for skin cancers on the face, neck, feet and genitals,” says LeBoeuf. “It has the lowest recurrence rate and you remove the least amount of normal tissue in the surrounding area.”

Glass underwent Mohs surgery in March of 2019. He knew what to expect since he refers more than 100 patients annually for it. “My surgery took two passes before achieving clear margins, and Dr. LeBoeuf was great,” says Glass. “He spoke to me when he got the first results back and we talked about the options. There was a spot at the base of the first layer that was suspicious for squamous cell carcinoma that he thought we could either leave or take out. After discussing it, we both decided that he should remove the next layer to make sure that the cancer didn’t come back.”

The surgery left a small hole on the underside of Glass’s nasal tip. While LeBoeuf closes the wound on the majority of patients, in some instances small holes can be left to heal on their own with good cosmetic results. In this case, Glass and LeBoeuf made the joint decision to not close it and let the hole heal on its own. “We decided to let it heal from the inside so it would fill in,” says Glass. “I had a little bit of a divot on the tip of my nose and it was discolored for a while, but it healed up nicely.”

Glass says that his patients frequently notice the scar under his nose and ask him about it. “I have no hesitation telling my patients that I had skin cancer on my nose and that I went to Dr. LeBoeuf for Mohs surgery,” he says. “It was a humbling experience, getting numbed up and having that anxiety for an hour to an hour and a half, when you’re waiting to find out if your margins are clear or not. It put me in the shoes of our patients and made me appreciate the amount of discussion that our Mohs surgeons put into making the patient comfortable.”

For patients who suspect they have skin cancer or learn after a biopsy that they have skin cancer, Glass recommends asking your dermatologist and Mohs surgeon what about options  for removing the cancer and for tissue reconstruction. “The doctors we have at Dartmouth-Hitchcock will spend the time answering your questions,” says Glass. “And if the patients take control, I think it will make them more confident in the outcome.