Home / For Patients & Visitors / D-H Stories / Our Patients. Their Stories. Prateek Mohanty
In This Section

Our Patients. Their Stories. Prateek Mohanty 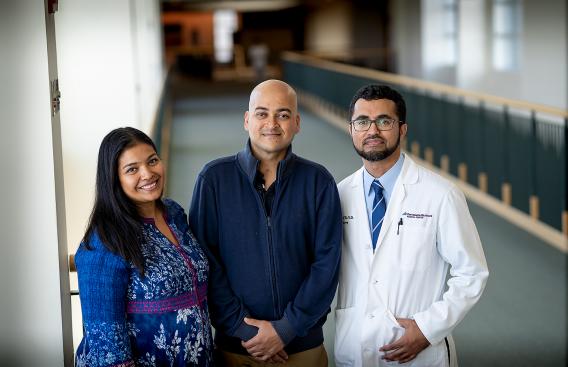 ...thankfully we were in the right place, with the right doctor and at the right hospital when all of this happened. Thankfully it all worked out.

When Swati Mohanty and her husband, Prateek, returned to Dartmouth-Hitchcock Medical Center (DHMC) on August 29, 2019, she happily greeted members of the Neurosurgery team who had helped to save her husband’s life a year earlier. Prateek, however, was a little shy with the clinicians—Neurosurgeon Naser Jaleel, MD, PhD, and neurosurgery nurses Adrienne Williams, APRN, and Dillon Young, APRN—partly because he doesn’t remember anything from the more than two months he spent at DHMC. The 37-year-old knew only that he had overcome bacterial meningitis and ventriculitis, which have a 90 percent-plus mortality rate, and that he was extremely grateful for his medical care.

After thanking the Neurosurgery team during their August reunion, Prateek said, “I now have another young daughter at home since I left here. And I know that every second I spend with her and my older daughter, I owe it all to you.”

Prateek’s medical journey started with a family vacation to New England from their home in Toronto, Canada. Three days into the July 2018 trip with his wife and 18-month-old daughter Arya, he got a bad headache. Over the next 24 hours, he spiked a high fever, began vomiting and started shouting deliriously. His alarmed wife took him to Grace Cottage Hospital in Townshend, Vermont. The Emergency Department suspected meningitis and immediately arranged for the Dartmouth-Hitchcock Advanced Response Team (DHART) to transport Prateek to DHMC in the DHART helicopter.

As it turned out, Prateek had both meningitis and ventriculitis. Meningitis is an inflammation of the brain and spinal cord that is usually caused by an infection. Ventriculitis is the inflammation of the ventricles in the brain, which are responsible for producing, containing and circulating cerebrospinal fluid (CSF) throughout the brain. Ventriculitis results in scarring of the ventricular walls, which blocks cerebrospinal fluid flow and causes increased pressure in the brain.

“This combination of meningitis and ventriculitis made his condition extremely dangerous,” said Jaleel. “Not only did he ultimately need intravenous and intrathecal antibiotics [which are directly injected into the CSF within the spinal column] for his meningitis, but also multiple ventricular drains to reduce high intracranial pressures caused by blockage of CSF flow.”

Jaleel saw Prateek in DHMC’s Intensive Care Unit (ICU) the morning after he was admitted, and ordered a second computed tomography (CT) scan of Prateek’s brain to see what changes had occurred overnight. “Neurosurgery was consulted because of the extreme amount of intracranial pressure in his brain,” Jaleel said. “His mental state was poor, he couldn’t follow commands and we could see that the ventricles in his brain had become a little larger.”

Jaleel knew that if the pressure inside Prateek’s brain continued to increase, his neurological condition would worsen and the blood supply to his brain would decrease. “The brain would have suffocated because there would be no blood supply,” he explained to Prateek during his August visit to DHMC. “And you would have had a rapid reduction in survivability.”

Thinking “outside the box”

“This was a highly unusual case because of the number of drains we had to insert, and there was no mention in published medical literature of how a case like this is handled,” Jaleel said. “So, we had to think outside the box and talk to colleagues here at DHMC and around the country.”

The DHMC ICU team also put Prateek in a medication-induced coma and placed him in extreme cold, or hypothermia. The goal of this treatment combination was to reduce brain activity, oxygen demand and, ultimately, intracranial pressures. Jaleel explained this to Prateek during their reunion, telling him, “We had Neurology, Critical Care, Neurosurgery and our nursing staff involved. Everybody was doing the best they could to keep you alive.”

Swati noted that Prateek’s hospitalization was a difficult time for her and their family, as her husband’s condition “went downhill for five or six weeks.” But Jaleel says that Prateek’s incredible family support (his parents came from India) never wavered and played an important role in his recovery, and in buoying the medical team when his prospects looked poor. “Your parents and your family said, ‘We don't care if he is in a coma for the rest of his life. We just want him to be alive. We will take care of him,’” Jaleel says.

“On the road to recovery”

When the medical team first tried to ease Prateek out of his coma, it was unsuccessful. But their second attempt worked. “When he started to follow our commands, we knew things had changed and he was on the road to recovery,” says Jaleel. Soon afterward, one of DHMC’s Infectious Disease doctors stopped by Prateek’s room while rounding with residents. “The doctor said, ‘What I’m seeing in front of me is the M word. This is a miracle,’” Jaleel said.

In early September, Prateek underwent surgery to place two permanent catheters internally in either side of his head. He was discharged a week later. “The catheters are connected to a valve that allows the cerebrospinal fluid to drain from the brain,” Jaleel says. “If the pressure in his brain gets higher than a certain set point, the spinal fluid goes down the catheters to the peritoneal cavity [the space within the abdomen that contains the intestines, stomach and liver] or is reabsorbed into his body.”

Jaleel is now writing an article about this unusual case, a case that Prateek is still processing. In addition to not remembering his hospitalization, Prateek doesn’t remember much about his life prior to the illness. He has spent the past year resting and letting his brain heal, and adjusting to the side effects from his illness, such as hearing, vision and balance issues.

At this point in his recovery, Prateek knows he worked as an auditor for a bank, but doesn’t remember his co-workers, bosses or what his job entails. “Over the next few months, I’ll be going back, meeting my colleagues and learning about my job,” he says. “Then hopefully my brain will connect all the dots and the wires, and I will remember where I was a year ago.

“But thankfully we were in the right place, with the right doctor and at the right hospital when all of this happened. Thankfully it all worked out.”

Our Patients. Their Stories. Prateek Mohanty