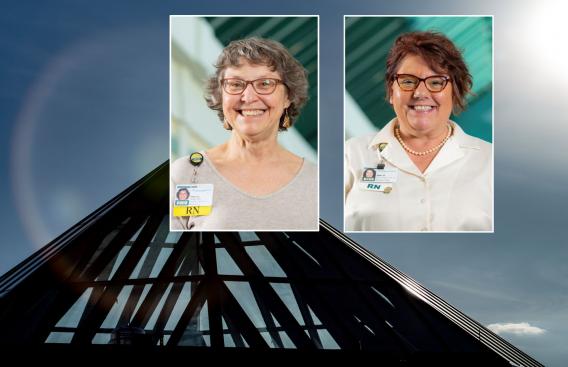 Dartmouth-Hitchcock Health (D-HH) is proud to announce that two registered nurses from the D-HH system – Julie Percy, RN-BC, Care Coordinator at Dartmouth-Hitchcock (D-H) Concord Primary Care, and Sharry Keller, RN, CHPN, Palliative Care Nurse Clinician with the D-H Palliative Medicine Team – were recognized for their outstanding achievements in the past year at the 2020 Excellence in Nursing Awards on November 19. The Excellence in Nursing Awards, held virtually this year due to the COVID-19 pandemic, are a collaborative effort of New Hampshire Magazine and the New Hampshire Nurses Association (NHNA) to recognize the state’s very best nurses in a number of categories – those who go above and beyond to comfort, heal and educate.

Percy, of Tilton, who was recognized for excellence in gerontologic and long-term care nursing, has been in the nursing field for more than 25 years and began working at the internal medicine department at D-H in 2000. Percy is the liaison between the D-H Primary Care department and four local nursing homes, Harris Hill, Havenwood, Pleasant View and Presidential Oaks. She is certified in Advanced Care Planning and in Gerontological Nursing through the American Nurses Credentialing Center. Additionally, Percy has completed Health Coach Training and is working on becoming certified in Transitional Care Management through the American Academy of Ambulatory Care Nursing.

Keller, of Canaan, who was honored for excellence in hospice and palliative care nursing, has been with Dartmouth-Hitchcock Medical Center (DHMC) since 1985 and joined the Palliative Medicine team in 2016. Within one year of joining her current team, Keller received her Hospice and Palliative Nursing Certification. Through completion of Serious Illness Conversation Training and additional one-on-one mentoring by a physician on the team, Keller joined her physician and nurse practitioner colleagues in being able to provide focused and effective serious illness conversations, expanding the reach of the team.”

The keynote address at the Excellence in Nursing Awards were delivered by Susan Reeves, EdD, RN, CENP, executive vice president of DHMC and chief nurse executive for D-HH. In her remarks, Reeves said that the pandemic has highlighted more than ever the critical role nurses play in our health care system.

“Since late last year, our entire world has been rocked by this pernicious virus. And though hope is on the horizon, we are not out of the woods yet. The foundational and essential front-line role that nurses have played in this time of stress, fear, need and loss can’t be overstated,” Reeves said, adding that studies show nursing is the most-trusted profession in the United States. “When the people of our country ARE stressed, afraid, need care and comfort, they turn to nurses.  And we answer that call.”

To learn more about the Excellence in Nursing Awards and see a full video of the award ceremony, visit https://www.nhmagazine.com/excellence-in-nursing/.