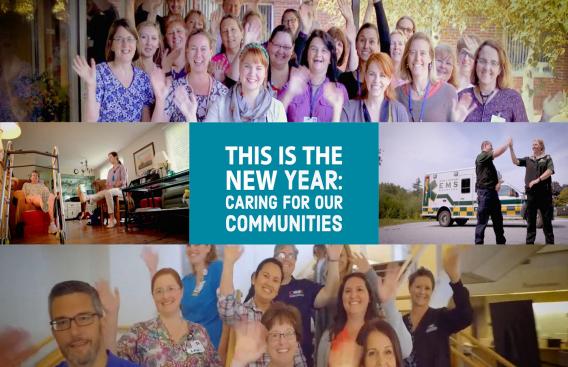 More than 600 staff in 12 locations throughout Dartmouth-Hitchcock and at affiliate hospitals and clinics were filmed for a new video series meant to celebrate the year ahead with the title song “This is the New Year” by A Great Big World. The videos feature employees smiling, waving, caring for patients and enjoying the song, representing departments and units from the following locations:

The series include versions for each affiliate hospital with only their staff in the video so that each location can show internally to their teams and externally on their social media platforms. Shown here is one version that includes scenes of employees from all of the above locations.

The video series was produced by the D-H Creative Production Team, which is part of the D-H Communications and Marketing Department. It was the first time the team produced a series of videos in collaboration with the communications and marketing teams from the affiliate hospitals.

The song’s meaning resonated with the organization’s goal to come together as an integrated health system, working together as individuals and as teams to care for our patients across the region. The videos will be shared on social media with the hashtag “DHbettertogether.” Below are the song’s lyrics.

"This is the New Year" by A Great Big World

And I will give the world to you

And I would give the world to you

And I would give the world to you