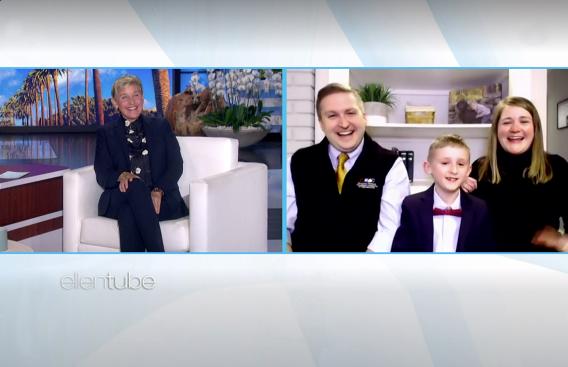 We are honored to be part of this once in a lifetime opportunity and send our most sincere appreciation to Elliot, BJ and Carrie for their years of support for CHaD and our patients.

On Thursday, February 18, CHaD ambassador Elliot Perry made his national television debut on the hugely popular, “The Ellen DeGeneres Show.” Elliot appeared with his parents, BJ and Carrie, to promote his mission to build two playgrounds for Children’s Hospital at Dartmouth-Hitchcock (CHaD) in 2021.

Elliot’s national appearance highlighted his 121 Club, a fundraising campaign to raise $121,000 for a playground at Dartmouth-Hitchcock Medical Center in Lebanon and Dartmouth-Hitchcock in Manchester. During the segment, Ellen presented the Perry's with a $20,000 contribution to the campaign, courtesy of her partners at Shutterfly.

The 121 designation is significant to the Perrys as it represents the number of days Elliot spent in CHaD’s intensive care nursery when he was born several months premature. After he returned home, the Perrys became strident ambassadors for CHaD, fundraising for various initiatives over the years as a way to say thanks to the doctors, nurses, and support personnel who saved Elliot’s young, fragile life. To date, their greatest advocacy efforts have supported CHaD's Battle of the Badges Hockey Championship, where they have combined with Team Police forward Kyle Daly (Manchester Police Department) to raise more than $100,000 in five years.

With the launch of the 121 Club, nine-year-old Elliot is building playgrounds that will become a vital part of the care system for patients at CHaD. They will create a better care experience for patients, allow families to take a break during long visits, and build positive coping skills. The new outdoor spaces will also help patients develop gross motor skills and allow every CHaD kid, no matter their difficulties, enjoy the playgrounds.

“We are honored to be part of this once in a lifetime opportunity and send our most sincere appreciation to Elliot, BJ and Carrie for their years of support for CHaD and our patients," said Natalie Harrison, director of CHaD Community Relations. "The playgrounds will be a wonderful addition to our young patients’ experience and will help in so many ways."

With the donation from Shuttefly and “Ellen,” Elliot’s campaign had generated more than $102,000 for the playgrounds. To get involved in the campaign, visit http://dhmc.convio.net/goto/121Club

As New Hampshire's only full service, comprehensive children's hospital, the Children's Hospital at Dartmouth‐Hitchcock (CHaD) is committed to providing outstanding compassionate care for children and their families. Their physician expertise provides primary, specialty, and tertiary care to the children of New Hampshire, Vermont, and beyond. CHaD offers inpatient (hospital care) and outpatient (same day care) services at Dartmouth‐Hitchcock Medical Center in Lebanon, NH. Outpatient and same day surgery services are available at Dartmouth‐Hitchcock Manchester, as well as outpatient pediatric specialties at Wentworth‐Douglass Hospital, Dover and in Exeter. Primary care is available at Dartmouth‐Hitchcock facilities in Bedford, Concord, Keene, Lebanon, Manchester, and Nashua, NH, and Bennington, VT. For more information about CHaD, please visit www.chadkids.org or contact us at (603) 650‐KIDS or chad.community.relations@hitchcock.org.