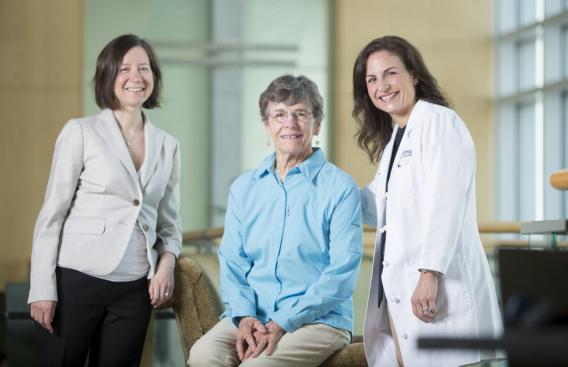 I wanted them to find what was in my blood, my skin, my DNA and figure out why I had survived while others had not.

Nancy Calder
Nancy Calder is participating in a clinical trial designed by Christina Angeles, MD, right, based on research by Mary Jo Turk, PhD, left, to discover why patients who develop vitiligo during melanoma treatment have such long-term survival rates.

There can sometimes be confusion and even fear associated with the term “clinical trial.” Cancer clinical trials cover widespread research from experimental new drugs to mere observation. Patient eligibility is specific to each trial and includes patients whose cancer has progressed despite standard treatment and may find newer options in a clinical trial, or, in the case of Nancy Calder, patients who have seen excellent results from standard treatment and been in remission for years, and who were not expecting to suddenly be given an option to participate in a new research study.

The Rise of Immunotherapy

“I’d been in remission for metastatic melanoma since the spring of 2009,” says Calder. “I’d had a low chance of survival so it was remarkable. We didn’t know why I was successful so at that time I’d told my doctor, ‘Use me!’ I wanted them to find what was in my blood, my skin, my DNA and figure out why I had survived while others had not. Maybe whatever was in me could be used to help find a cure.”

Meanwhile, behind the scenes in the NCCC research labs, Mary Jo Turk, PhD, co-director of the Immunology & Cancer Immunotherapy Research Program and her research team were busy studying immunotherapy as a way to treat several cancers, including melanoma. “The basis for immunotherapy is that in patients that already have cancer, you can get the immune cells to recognize the tumor as foreign and destroy it,” says Turk. “This theory has been around for over 100 years but finally in the last five years we have therapies that really stimulate a patient’s immune system and in some patients we’re getting very durable responses, like Nancy.”

In the early 2000s, there was a therapy called interleukin-2 (IL-2) that stimulates the growth of T cells, our most potent fighting immune cells against cancer. High doses of IL-2 were given to metastatic melanoma patients—patients whose melanoma had spread—and about five percent of them had great responses, like Calder. Five percent is not enough but gave a glimmer of hope to Turk’s team that better immunotherapies could be useful and the better ones have since become available. Initial data from clinical trials now suggest as high as 40 percent of patients responding quite well. Immunotherapy has taken great strides in the last five years, receiving FDA approval and becoming mainstream therapy for metastatic melanoma.

Turk’s team is now studying a skin condition called vitiligo, which is developed by some patients who are very successful in treatment. Vitiligo is an autoimmune condition that draws T cells into the skin where they remain for months to years and are able to attack melanoma cells and fight skin cancer. “We think vitiligo is actually an important factor in generating a strong response against melanoma and why patients who have this condition are doing better,” says Turk. “Nancy is a great example of this and that’s actually how I met her.”

Christina Angeles, MD, a physician–scientist with primary interest in melanoma knew that patients with vitiligo were long-time survivors of melanoma. Looking for collaboration with a tumor immunologist to find out why, and having seen the results of Turk’s studies of vitiligo in mice, Angeles designed a human clinical trial based on Turk’s laboratory work and recruited patients from her own practice and from a 2011 blood research study, to which Calder had donated. “The 2011 study looked at markers in blood. The more recent work in Mary Jo’s lab looks at memory T-cell populations in the skin of mice with vitiligo and we can now start to look at the same in human skin,” Angeles says. Calder qualified for this trial because she is a survivor of metastatic melanoma who, as a result of treatment, developed vitiligo. And, because she was all too willing to use her remarkable case as a learning opportunity to finding a cure.

Participating in the Trial

“When I got Dr. Angeles’ call about the trial, I was pleased,” says Calder. “I thought that clinical trials were usually for someone who was actively going through treatment for cancer. I was pleased that there was still an opportunity to participate. I want researchers to find out whatever they can about me so that young people, my kids and grandkids don’t have to worry about melanoma.”

Calder’s involvement in the trial entailed providing two skin samples from her arm and waist. “We extract T cells from skin and look at specific markers to see what’s unique about them compared to T cells on other parts of the body,” explains Angeles. They then stain the skin and examine it under the microscope to see where exactly in the skin these special cells are located. “We know that the T cells remain in skin targeting against melanoma and that they have a memory to recognize melanoma specifically and protect against it. We’re looking at how that happens. Is the aggressive immune response of these T cells against melanoma also why patients are developing vitiligo?” asks Angeles.

“I don’t find my involvement in the trial challenging at all and wanted to participate to promote our researchers’ learning as best I can,” Calder says. “We may be a ways away from learning anything new about skin cancer and melanoma, but I would love for them to be able to take this information and apply it to future treatments.” While this clinical trial investigates the mechanism of memory T cells in the skin of patients who develop vitiligo, future studies will look at T cells in patients who do not develop vitiligo. “Our hope is to one day find a drug or immunotherapy that will induce the same response in cells of patients who have not developed vitiligo, so that they can achieve the same long-term survival,” says Angeles.

In the meantime, Calder stresses the importance of sun safety and has ever since her first diagnosis of basal cell carcinoma in 1981. “Live your life, but be smart about it. Sunscreen, hats, cover up. I do skin checks regularly and haven’t had signs of melanoma in years.”

Calder plans to leave the door open to Turk and Angeles as long as they need her. “I look at this as a way that those of us who are lucky enough to survive can give back. To Professor Turk and Dr. Angeles, thank you and keep up the good work. They have been delightful, professional, knowledgeable and kind. I'm available if they need more skin!”