Home / For Patients & Visitors / D-H Stories / Our Patients. Their Stories. Jeff Gibbs
In This Section

Our Patients. Their Stories. Jeff Gibbs 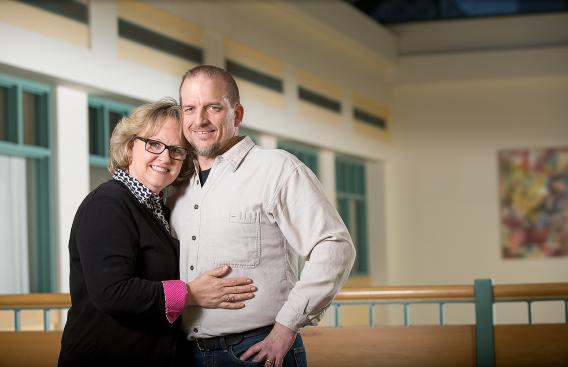 The care team made all the right decisions. Every single one. Any hesitation at any point could’ve been a game-changer.

Working in a die-cast shop, among large equipment and some sharp edges, Jeff Gibbs of North Hartland, VT, was used to scrapes and bruises on his arms. And at 44, he’d never even been to the hospital; his medical record virtually nonexistent.

On March 28, 2014, as he repaired a piece of equipment he noticed a throbbing red spot on his upper left arm, shook it off and went back to work. Later in the afternoon, feeling a bit feverish, he took a couple of ibuprofen and, again, felt fine.

That evening, as Gibbs, and his wife, Kim, headed to their daughter’s school play, the ibuprofen began to wear off, and by intermission, the fever had returned. “It [my arm] was pretty angry,” he says. “A hundred times worse than any fever I’ve ever had.”

Seeing how white he had turned, Kim Gibbs suggested he go home. “But he told me,” she says, “there’s no way I’m missing this play.”

“By the end of the play,” Gibbs says, “I couldn’t even hold up the video camera. If you watch the video now, you can see it pulsating because my heart was racing so fast.”

At home, the Gibbses looked again at the spot on his arm. The redness had spread from his elbow to his shoulder and, he says, “more alarmingly, there were three black stripes running around the side of my arm that looked like fingers.”

Kim Gibbs still recalls the conversation she, and he had at that moment. “Normally I would have said, ‘suck it up, buttercup, and get some rest,’ ” she says, “but that night I was calm. I felt something come over me, and I knew we needed to get Jeff to the hospital right away.”

Gibbs was admitted to the Emergency Room at Dartmouth-Hitchcock Medical Center (DHMC) an hour later. Suspecting septic shock, doctors called in the Infectious Disease and Wound Center team to initiate a newly implemented care protocol known as a “sepsis bundle;” a process that includes several time-sensitive interventions to diagnose and treat sepsis.

Jeff received intravenous antibiotics right away, and every couple of hours another blood sample was taken to see how aggressively his immune system was working to fight off the infection in his arm. “My immune system was running triple time,” Jeff says.

Sean Bears, MD, in General Surgery, closely monitored the effects of the antibiotics, but when a scan showed the infection spreading to his shoulder and on its way to Gibbs' heart, there was no more time to wait. “When Dr. Bears determined surgery was needed, he said we have to go now,” Kim Gibbs recalls.

According to Bears, the “rapidly progressing redness and swelling of Jeff’s left arm, along with severe pains and signs of sepsis” required urgent action.

After the first of two surgeries, Bears identified that Gibbs had a group A streptococcal infection, the most common bacteria to cause necrotizing fasciitis, more commonly known as a flesh-eating bacteria, which results in the rapid decay of the body’s soft tissue. Amputation of the infected limb is not uncommon, and the condition can quickly become fatal.

“Fortunately, we were able to get to the infection when it was only in the skin, fat and fascia of the muscle,” says Bears. “I was concerned we were going to have to remove his biceps muscle, but fortunately, too, it was not infected.”

Weeks later, following his recovery at DHMC and outpatient care to keep the infection site clean so his arm could heal, according to Jeff, “Dr. Bears told us he was finally comfortable sharing how dangerous my situation was. If I’d gone to bed that night and never come to the hospital, I wouldn’t have woken up.”

From the Infectious Disease team’s application of the sepsis bundle to Bears’ quick decision to pursue surgery, and the consistently excellent care of the nursing staff throughout his stay, Gibbs' first experience as a hospital patient, he says, could not have been better. “I never once felt uncared for,” he says.

Kim Gibbs, the director of the Office of Governance and Leadership at Dartmouth-Hitchcock, echoes that sentiment. “I’m pretty critical, and I know what to expect,” she says, “and the way they took of care of Jeff was top notch.”

Bears acknowledges all who contributed to the surgery’s success. “The nurses in the clinic were very helpful with wound care, and overall it was a collaborative effort with the residents, nurses, patient and family,” he says.

“Knowing that everybody involved not only saved my arm but my life as well—it just gets to you,” Gibbs says with emotion in his voice.

“They made all the right decisions,” adds Kim Gibbs. “Every single one. Any hesitation at any point could’ve been a game-changer.”

Our Patients. Their Stories. Jeff Gibbs