Home / For Patients & Visitors / D-H Stories / Our Patients. Their Stories. Paul Keane
In This Section

Our Patients. Their Stories. Paul Keane 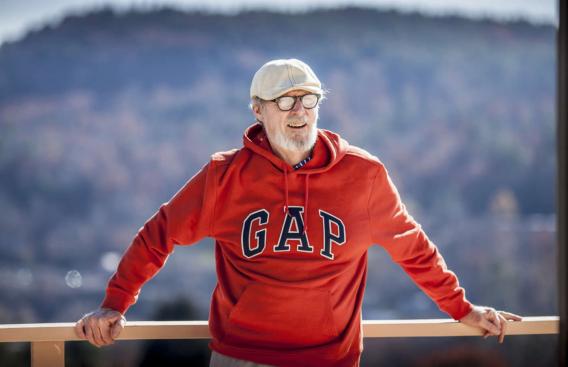 What follows is an essay written by Paul Keane, M.A., M. Div., M.Ed. to Dr. James Weinstein, President and CEO of Dartmouth-Hitchcock:

At 2 in the morning on Wednesday September 23rd Google saved my life. Thirty six hours later, Dartmouth Hitchcock Medical Center had restored my health and I walked out their doors on my own two feet.

Let me tell you the story. I had been having heartburn for ten days. Sometimes it would make my throat ache or my left arm ache , down to my wrist. Usually it would go away, especially if I drank a glass of buttermilk or took Pepto-Bismol. To me it was what my grandmother always warned me when I was a kid: "You'll ruin your digestion Paul if you don't eat slowly." I never listened to her, all these 70 years. Now, I thought, I'm paying the price.

But that Wednesday morning at 2 a.m. buttermilk and Pepto-Bismol didn't work. I couldn't get rid of the aching left arm.

I got out of bed and Googled "left arm pain" hoping "indigestion" would come up. Instead the top ten articles all had the words "heart attack" in them, something I had suspected but didn't want to admit. I clicked on one article and scrolled to the last paragraph for some reason, and here's what I read: "Remember, time is muscle."

I knew instantly what those three words meant. The longer the heart is deprived of blood in a heart attack, the more heart muscle is killed.

Those three words on Google literally saved my life. I pulled on pants, shirt and shoes and drove over to Dartmouth-Hitchcock hospital. I didn't even bother to shut off the tv and the computer. They were still on when I returned 36 hours later with a stent in my coronary artery. I had had a complete blockage of that artery and I got to the emergency room just in time. Only 1/34th of my heart was damaged, because I had acted on Google wisdom: Time is muscle.

The amazing part of the story is that DHMC diagnosed my condition in two blood tests , six hours apart: the first one was neutral because the heart attack was just beginning; the second one showed chemicals which clearly established, as the cardiologist said over my bedside, that "You are having a heart attack". That six hour wait gave the heart time to give off chemicals which proved it was being damaged. A heparin IV was inserted to dilute the clot and thereby stop the damage. Time is muscle.

Later I learned that what I was having was classified as "acute": a full blockage of the left coronary artery. Luckily, getting there early prevented major damage.

I was about to undergo an amazing experience. After six more hours I was wheeled up to the catherization lab: two surgeons, two interns, a cardiologist and a doctor greeted me. After I made my wishes clear that I did not want to be resuscitated if something went wrong and that I had a living will that said just that, the surgeon spoke to me as a professional, and, if you will excuse the imagery, I felt that he spoke from the heart: "I am a doctor and my job is to save lives. If something unexpected happens and I can make quick decision which will save your life even if you temporarily wind up on a life support machine, I would like to be able to do so. If later we can't get you off life support, then your living will can come into play. I don't feel comfortable just giving up and letting you die should something happen which I could adjust. Will you trust me?"

I was so moved by the sincerity of his commitment to saving life rather than letting it slip away, that I said " Yes. I can agree to that. I will trust you".

I chose having a stent inserted into the blocked coronary artery rather than having traditional surgery. It was inserted through a vein in my arm and threaded toward the heart. The whole process took less than half an hour and I was awake the entire time.

The team consisted of the surgeon, two interns, a supervising cardiologist, a male nurse and another doctor, and five or six television screens. Speaking commands and responses loudly and firmly to each other they moved like a polished ballet troupe in perfect choreography as the stent was threaded into my heart and expanded and opened by a tiny balloon.

Ballet may be the wrong image. A graceful triple play in baseball might be a better image. Every player knew what the other player was doing and they kept their eye on the ball as it moved from first to second to third.

It was a masterpiece of elegant teamwork.

After the procedure, I was wheeled on a gurney to cardiac post-op by a male nurse who engaged me in conversation while he applied pressure to my incision for fifteen minutes.

And now my education was about to begin. Not only did this longtime male nurse effortlessly and tactfully mentor every other nurse he came in contact with, but when I was moved to a room on the cardiac care unit, I discovered that every nurse mentored every other nurse. It was truly a collegial atmosphere in which people accepted advice and corrections without any sign of bruised ego or defensiveness. I felt like I had been dropped into Voltaire's "Best of all possible worlds."

And all of this mentoring was accomplished with smiles and cheerful tones of voice. The same smiles and cheerfulness were offered to me and to other patients by every staff member I encountered. There were no nay-sayers, no grouches, no competitors; just colleagues sharing knowledge and offering support to each other and to patients.

And it seemed sincere. I can tell a phony smile a mile away, and everyone I met seemed to smile from some inner light.

Oh, I know this sounds corny, like I'm wearing rose colored glasses. You probably think all those drugs they give for surgery made me Mr. Happy Eyes. But you are wrong. I was the same impossibly fussy person I've always been. It's just that I'd met my match in professional behavior. These were adults who loved what they were doing.

I had always said that exactly that quality was the secret to the high school I taught at for 24 1/2 years: happy adults, fulfilled adults. And now I had found it here in another learning environment----another teaching institution, Dartmouth-Hitchcock Medical Center.

Thirty-six hours after I walked into that hospital at 2 am with a clogged pump, I walked out with a fully functioning pump. I drove home and attended a school board meeting that night, where I am an elected member.

Google had saved my life: time is muscle. And Dartmouth-Hitchcock's hospital had restored my health, all in an amazing 36 hours.

And now a confession. I have had a bias against big institutions, even though I was born in one, what is now called Yale-New Haven Hospital. They seem impersonal and mechanical to me. I had cast my lot with the 'Small is good' crowd. When I heard that the small Alice Peck Day Hospital closest to my home in Vermont was going to merge with Dartmouth-Hitchcock Medical Center a few miles further away in New Hampshire (I live on the border) I had silently thought: the death of small town friendliness will be the result.

My thirty six hours at Dartmouth-Hitchcock having my heart repaired, has changed my opinion entirely. That merger now seems to me a marriage made in Voltaire's heaven just waiting to happen. DHMC has somehow managed to be a mega-hospital with a village feel. Alice Peck Day Hospital will fit right in.

The secret is happy, fulfilled adults. Whatever DHMC is doing, it is doing it terribly right.

I felt privileged to have an insider's experience of that 'best of all possible worlds' ----- but glad it only lasted for 36 hours.

Our Patients. Their Stories. Paul Keane