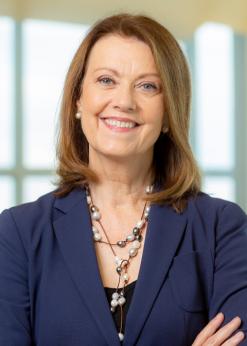 Dr. Conroy comes to Dartmouth Health from a position as CEO of Lahey Hospital and Medical Center in Burlington, MA. In this role, she drove the clinical integration strategy for the hospital, expanded its educational and research programs and strengthened the organization's operational infrastructure and facilities to support the overall objectives of Lahey Health.

Prior to her leadership role at Lahey, Dr. Conroy served for more than five years as Chief Health Care Officer for the Association of American Medical Colleges in Washington, DC. In this role, she advanced AAMC’s strategic imperative of leading change to improve the nation’s healthcare system. By working with member medical schools and teaching hospitals, Dr. Conroy helped establish national health priorities and developed best practices to improve health by focusing on medical education, care delivery, research, diversity and inclusion.

Prior to these roles, Dr. Conroy held several academic and administrative leadership positions at the Medical University of South Carolina (MUSC). Among other responsibilities, she served as President of the MUSC medical staff, Director of Residency Education for the Department of Anesthesiology, Chair of the Department of Anesthesia & Perioperative Medicine, Associate Vice President for Medical Affairs, Executive Medical Director, and Senior Associate Dean of the MUSC College of Medicine.

She received her undergraduate degree in chemistry from Dartmouth College in Hanover, New Hampshire and was the recipient of a Robert Sloan scholarship from Singer Corporation. Dr. Conroy received her medical degree from MUSC, where she completed her residency in anesthesiology, serving as chief resident for one year.