You might meet Barbara when you come for your screening, because she works right here in the Breast Health Center. When she heard that the Center was looking for healthy volunteers to join a study for a new imaging technique, she jumped at the chance.

On the eve of undergoing a partial mastectomy of her right breast late in the winter of 2012, Linda Burroughs fielded yet another phone call from her radiologist at Dartmouth Hitchcock Medical Center, Steven Poplack, MD.

"He'd been thinking about me and had re-examined the mammogram of my left breast, and he asked if I would be willing to join a study and have tomosynthesis-the very latest in breast-imaging technology," Burroughs recalls. 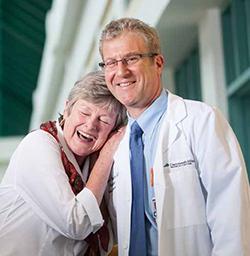 As the 47th subject among 50 in the Dartmouth Hitchcock Medical Center portion of the clinical trial, Burroughs was joining the study relatively late...and just in time: The Digital Breast Tomosynthesis (DBT) imaging detected an abnormality in the left breast, and after an MRI biopsy confirmed the presence of more cancer, surgeon Kari Rosenkranz, MD, performed partial mastectomies on both.

Four days later, Burroughs was joining friends on a long-planned trip to Washington, DC. Following precautionary radiation treatments, she is now enjoying time with her husband at a family camp on Mascoma Lake in Enfield, NH, and a future that, for now, appears cancer-free.

"It's been an astonishing experience," Burroughs said. "This shows what it means to diagnose a person, to be able to learn so much more and be able to give you the right answers."

Poplack is quick to point out, after nearly a decade of research into the technology, that much study remains to be done on how many women tomosynthesis can and will help, and how it will help them. For example, while in Burroughs' case DBT detected an abnormality, it helped spare other subjects of the study the anxiety of receiving wrong first diagnoses.

"Things are no longer hidden," says Poplack, codirector of breast imaging. "On a mammogram, the tissue can stack up to look like cancer and fool us into thinking there is a problem when there really isn't."

"It's really a double benefit. It allows us to detect what we otherwise wouldn't see, and not go down the path of a false alarm."

Poplack's team in radiology has been collaborating with researchers from the Dartmouth Cancer Center and the Thayer School of Engineering since 1999 to compare tomosynthesis with other forms of breast-cancer detection. To produce the 3-D images, a tube revolves around the breast in short arcs while sending out multiple X-rays in low doses. Radiologists then reconstruct the data gathered in a way that allows viewing of particular areas in thin layers of tissue.

While tomosynthesis exposes the patient to slightly more radiation than a conventional mammogram, the difference over time is "negligible," Poplack says, roughly equivalent to the amount to which one would be exposed on an airline flight from the east coast to Europe.

We were among the first institutions in the United States to do research on the technology, Poplack says, and it's one of five institutions that contributed data that led to approval from the federal Food and Drug Administration.

Nearing the end of phase II of the current clinical trial-under the financial support of the National Cancer Institute (NCI), researchers are analyzing data they gathered from Burroughs and the 49 other patients, comparing tomosynthesis with Contrast Enhanced Magnetic Resonance Imaging (CEMRI). Poplack expects to share what they've learned with his peers at the annual meeting of the Radiological Society of North America in late November.

"We hope to publish the results in full soon thereafter," Poplack says, adding that "we have our fingers crossed" for receiving additional NCI funding for continued research.

While the researchers continue to fine-tune the technology and strive to better understand its benefits, patients like Linda Burroughs are helping to spread the word about the promise of tomosynthesis for women with dense breast tissue, as well as the care that women can expect from clinicians and researchers.

"Another year [without detection of cancer in her left breast] could have been too late for me," says Burroughs, a former fundraiser for New Hampshire Public Television. "It's about the technology, but it's about the people, too."