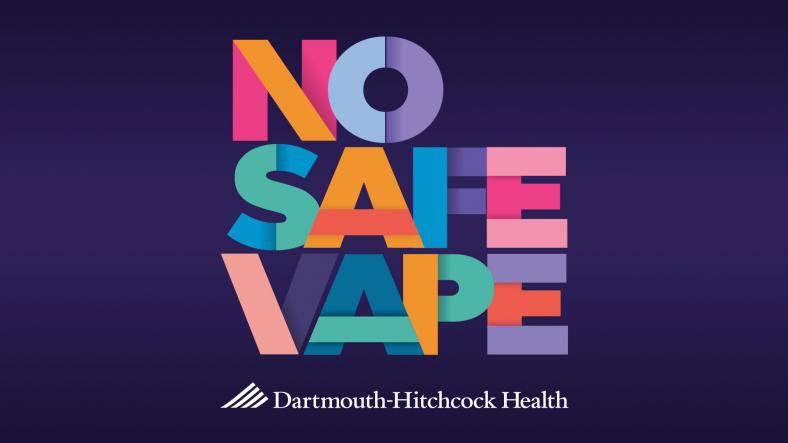 There is no such thing as a risk-free e-cigarette. To claim otherwise is just blowing smoke. From ingredients such as THC (tetrahydrocannabinol), nicotine and chemically-laden flavors—all vapes are laced with poison. When it comes down to it, there is no safe way to vape.

At Dartmouth-Hitchcock, we believe all parents should be empowered by trustworthy information. You have questions, we have answers. 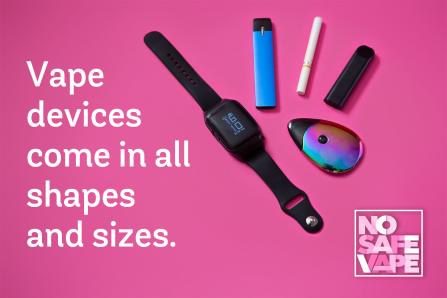 E-cigarettes—also called “vapes,” “vape pens, “Juuls” and “e-cigs”—are handheld, battery-powered vaporizers that simulate smoking. When they first came on the market in 2007, e-cigarettes looked like regular cigarettes or cigars, now the devices look like pens, lipstick, flash drives and even medical inhalers, making it easy for teens to hide.

There are hundreds of device types, and thousands of flavor profiles—such as “strawberry shortcake,” “unicorn milk,” “bird brain” and classic “menthol.” The industry claims e-cigarettes are safer alternatives to traditional cigarettes, but the long-term effects are still unknown.

Does my teen vape?

Vaping is definitely on the rise among adolescents. In the past decade, vaping has gone from almost nonexistent to increasingly more common. According to the National Institute on Drug Abuse, more than a third of 12th graders report having vaped in the last 12 months—up 10 percent from the previous year. At a time when anti-smoking measures have successfully pushed traditional cigarette smoking down to its lowest recorded rate of only 5 percent of teens, vaping is increasing in popularity at an alarming rate reports the U.S. Department of Health & Human Services. The hike not only accounts for teens who may have switched from regular cigarettes to e-cigs, but exceeds it by a significant margin. In other words, kids who never smoked cigarettes—and likely never would have—are now getting hooked on nicotine by vaping.

While not all vape products include nicotine, most do. The e-cigarette industry is a highly unregulated industry and many vape products sold on the street that claim to be nicotine-free, actually do contain nicotine. Liquid cartridges and vape pods contain varying amounts of nicotine. Because the devices are easy to conceal, kids can vape more frequently, which leads to greater addiction.

The C. Everett Koop Institute at Dartmouth, dedicated to advancing health and well-being through research, education and policy efforts, found that kids who vape are three times more likely to go on to smoke regular cigarettes. 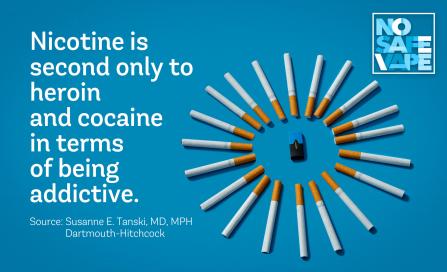 How is nicotine dangerous?

Nicotine is toxic and affects your health in a number of ways, like raising your blood pressure and adrenaline, which can increase your risk of having a heart attack. Medicine Net explains that nicotine also affects teens’ brain development, their learning, mood, and impulse control and increases the risk of developing depression and anxiety. Since nicotine is addictive, it rewires children’s brains and can possibly lead them to use other addictive drugs like alcohol or cocaine.

What about vapes without nicotine?

E-cigarette liquids usually contain propylene glycol, which is known to release formaldehyde gas when heated. Diecetyl—linked to “popcorn lung” disease—has been found in over 75 percent of flavored e-cigarettes. Various new chemicals are formed when the liquid juices are heated and converted into a fine mist—many of those chemicals are toxic.

Can vaping make you sick?

According to the Centers for Disease Control and Prevention, as of November 5, 2019, 1,888 cases of vape-related lung injury have been reported across the U.S. At least 39 people have died. No one ingredient has emerged as the cause of all these illnesses. While THC seems to have played a factor in most of the cases, it has not in all of them. A majority of the patients who have fallen sick are male and young—almost 80 percent are under 35 years old.

Early symptoms of the illness include fatigue, nausea, coughing and fever. Shortness of breath may prompt a visit to the ER and require hospitalization.