The page contains the following sections:

When is surgical repair of a heart rhythm disturbance advisable? 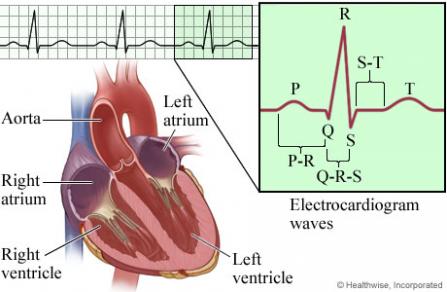 Atrial fibrillation (often referred to as AFib or AF) is the most common kind of arrhythmia, or disturbance of the heart's rhythm. Arrhythmias are caused by a malfunction of your heart's electrical system; in the case of AFib, your heart beats with an irregular rhythm. As a result, not enough oxygen-rich blood may be available to supply your body's needs. This can eventually lead to chest pain, heart failure or the development of blood clots that could result in a stroke (about 15% of strokes occur in people with AFib).

If you are diagnosed with AFib, your surgeon will evaluate the specifics of your situation and help you weigh the risks of cardiac surgery against the risks of continuing to manage the disorder with medication, other nonsurgical treatments or implantation of a pacemaker. Often, if your symptoms are not severe, they can be managed with lifestyle changes and/or medication. Typically, the correction of AFib is performed at the same time as another cardiac procedure—usually, the repair of a defective aortic or mitral valve. Occasionally, however, AFib causes such incapacitating symptoms that cardiac surgery to address the rhythm disturbance is undertaken as a stand-alone procedure.

Should you and your surgeon decide the time is right for surgery, keep in mind that our cardiac surgeons have considerable expertise in all the proven options for the correction of AFib.

How is repair of a heart rhythm disturbance accomplished?

There are several ways to restore your heart to a normal rhythm. Your surgeon will consider various factors—such as your age, the overall state of your health, and whether your AFib is chronic or sporadic—in deciding which of these options will work best:

All of these procedures can be performed via open-heart surgery, minimally invasive surgery or endovascular surgery. When they're done at the same time as another procedure, as is usually the case, the requirements of that operation typically determine which of these surgical approaches is most appropriate:

In the case of AFib, deciding whether cardiac surgery is advisable involves balancing the risks involved in any heart surgery against the risk of continuing to manage the rhythm disorder (as well as any associated valvular problems) with medication and other nonsurgical treatments.

The risks involved in surgery are typically quite low. Since surgery for AFib is often undertaken at the same time as another surgical procedure, the overall risks are generally the same as for whatever other procedure is being performed. In other words, performing cardiac ablation or a maze procedure does not usually result in any additional risk.

If the correction of the rhythm disturbance is successful—which is the case in between 50% and 70% of patients—the benefits are considerable. Typically, patients can stop taking blood-thinning medication (often referred to by the brand name of Coumadin), their symptoms are relieved, and the progressive damage to their heart is dramatically slowed or halted.

The typical hospital stay ranges from 4 to 7 days. At that point, the vast majority of patients are able to go home, with support from the visiting nurse service, though about 15% to 30% may need to spend some time in a rehab facility for more extensive rehabilitation. After discharge, patients are advised not to drive for about three weeks and not to lift anything heavier than 5 pounds for about 6 weeks. Beyond that point, they can resume whatever activities they wish to.

In cases when minimally invasive surgery is appropriate, the recovery period may be shorter (much shorter in the case of endovascular surgery).