When is surgical repair of a mitral valve advisable? 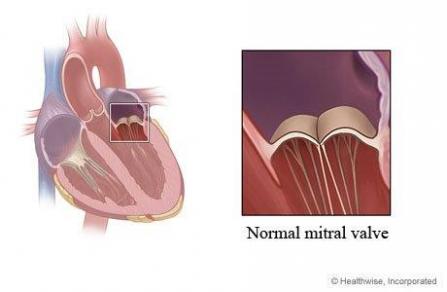 Your mitral valve is two little flaps of tissue that control the flow of blood from the upper chamber to the lower chamber on your heart's left side. If it's seriously damaged, especially if it's leaky, it is strongly advisable to consider surgical repair.

If you are diagnosed with a damaged mitral valve, your surgeon will evaluate the specifics of your situation—especially whether your valve is leaky (regurgitant) or blocked (stenotic). Then it will be possible to weigh the risks of surgery against the risks of managing the disorder with medication and other nonsurgical treatments. Sometimes, if your symptoms are not serious, they can be managed with lifestyle changes and/or medication. But often it will be advisable, especially for a leaky valve, to consider surgery to address the deficiency.

If your valve is severely leaky—as long as it hasn't been damaged by rheumatic fever and hasn't become calcified, or hardened—it is usually a good idea to repair the valve before it either results in significant damage to your heart or becomes so defective that it can't be repaired and must be replaced.

It is preferable to repair rather than replace a mitral valve, because a repaired valve generally results in better heart function, better resistance to infection, and better long- and short-term survival. Studies have shown that patients who have a leaky mitral valve repaired before their heart function deteriorates return to a long-term survival curve the same as that of a general age-matched population. So with mitral valve disorders, it is important to give careful consideration to surgery before symptoms of congestive heart failure begin to occur.

Should you and your surgeon decide the time is right for surgery, keep in mind that mitral valve repair is a particular specialty of our cardiac surgeons. They have considerable expertise in all the proven options for repairing damaged mitral valves and a record of being able to repair nearly all leaky mitral valves not damaged by rheumatic fever and not calcified. We commonly perform surgical repair of the mitral valve.

How is repair of a mitral valve accomplished?

There are several ways to repair a damaged mitral valve. If your valve is judged to be repairable, the three primary matters your surgeon will consider are whether one or both of the tissue flaps that make up your mitral valve need repair, what kind of repair is most advisable, and which surgical approach will work best.

Sometimes just one of the two tissue flaps that make up your mitral valve needs repair, but sometimes both do. The flaps are also known as cusps or leaflets; the mitral valve has a posterior leaflet (a C-shaped strip toward the back of your heart) and an anterior leaflet (a semicircle that fits into the open side of the C, toward the front of your heart). The valve's name comes from the fact that the shape of the flaps looks somewhat like a miter, the ceremonial headdress worn by a bishop. (The mitral valve is also sometimes referred to as the bicuspid valve—because it has two cusps, or leaflets. This can cause confusion, however, because there is a common congenital defect, present from birth, called bicuspid aortic valve; this is because the aortic valve is supposed to have three cusps, so a bicuspid aortic valve is one with only two rather than the normal three flaps.) Our cardiac surgeons have considerable experience in repairing one or both flaps:

There are three primary ways of performing the actual repair of a damaged mitral valve; these procedures are sometimes performed separately but are often used in combination:

The appropriate surgical approach will depend on such factors as how damaged your valve is and the overall state of your health. Though open-heart surgery is the most common option for mitral valve repairs, your surgeon will determine which of the following procedures is most appropriate in your particular situation:

In the case of a damaged or defective mitral valve, deciding whether surgery is advisable involves balancing the risks involved in any heart surgery against the risk that managing the disorder with medication and other nonsurgical treatments may result in progressive damage to your heart and circulatory system or may cause your valve to become so defective that it can't be repaired and must be replaced. Studies have shown that patients who don't have surgery to fix a severely leaky mitral valve—even those who haven't yet begun to show symptoms—can suffer serious consequences; within 10 years, about 90% will experience serious adverse effects (such as congestive heart failure, an abnormal heart rhythm, or a stroke), and some will die.

By comparison, the risks involved in mitral valve repair surgery are extremely low. A given patient's risk will vary, depending on such factors as age and overall health status, but the average mortality, or risk of death, from repair of a leaky (regurgitant) mitral valve is less than 1%. Such surgery is also associated with a 1% risk of a blood clot that causes a serious stroke. In addition, about 1% of patients may later require an artificial pacemaker. And any surgical procedure involves a very small risk of other complications, such as infection.

Patients who smoke can reduce their risk of complications if they stop smoking at least two to four weeks before their surgery (it is best not to quit immediately before having heart surgery, however, because when people stop smoking they often have short-term bronchorrhea, or excess secretions in their respiratory tract, which makes them cough a lot—and coughing a lot when you have just had heart surgery is not a good idea).

The benefits of successful surgery are considerable. The overwhelming majority of patients, once they recover, feel better than they did before the operation and are able to resume any activities they wish to engage in. Repairing a mitral valve usually not only fixes the damaged valve but also relieves all the patient's symptoms, results in improved short- and long-term survival, and in many circumstances returns the patient to a long-term survival curve the same as that of a general age-matched population. In addition, many patients whose mitral valve is successfully repaired are able to stop taking take blood-thinning medication (often referred to by the brand name of Coumadin).

The typical hospital stay ranges from four to seven days. At that point, the vast majority of patients are able to go home, with support from the visiting nurse service, though about 15% to 20% may need to spend some time in a rehab facility for more extensive rehabilitation. After discharge, patients are advised not to drive for about 3 weeks and not to lift anything heavier than 5 pounds for about 6 weeks. Beyond that point, they can resume whatever activities they wish to.