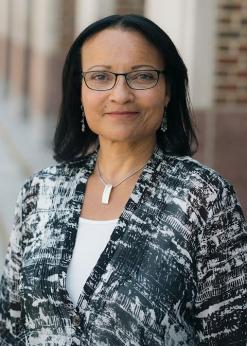 Tina Dooley-Jones spent more than 30 years in international development as a researcher, private consultant with the U.S. Agency for International Development (USAID). She maintains expertise and in-depth knowledge of the role and potential of international assistance to catalyze inclusive democracies, economies and social systems and services that address the needs and aspirations of individuals, households, communities, countries and regions.

Thriving on finding simple, practical solutions to complex challenges, Dooley-Jones capstoned her career with USAID as the first female Mission Director to USAID/Afghanistan. USAID’s largest Mission in the world with activities spanning the full array of development activities, including health, education, democracy and governance, agriculture, infrastructure, economic growth, and USAID’s only standalone Office of Gender. USAID/Afghanistan underwent a tumultuous period during her tenure, characterized by the prospect of peace, the devastating impacts of COVID-19 and aggressive Taliban insurgency. Dooley-Jones utilized her strong leadership, vision and problem-solving acumen to lead a staff of 250 development and humanitarian professionals and more than 100 implementing partners, to support a country attempting to overcome 40 years of conflict, natural disaster and war.

Prior to her retirement from USAID, Dooley-Jones served as USAID’s senior representative on the Department of State-led Afghanistan Coordination Task Force (ACTF). The ACTF, made up of several hundred State Department, USAID, and Department of Defense personnel coordinating with the Department of Homeland Security, is responsible for the evacuation and on-going efforts to assist more than 70,000 individuals to depart Afghanistan, and gain entry into and resettle in the United States.

Dooley-Jones served as the Deputy Mission Director in Afghanistan from 2019 to mid-2020. Prior to assuming her positions in Afghanistan, she served as Mission Director for USAID/Kenya and East Africa, overseeing a mission that provides bilateral assistance to Kenya and Somalia, assistance to East African regional institutions, and humanitarian assistance throughout the region. She also served on two separate occasions in Zimbabwe, and for multiple years in the South Africa/Southern African Regional Mission, Namibia and Morocco. Dooley-Jones began her career with USAID in 1994 as a Regional Housing and Urban Development Officer in Zimbabwe.

Working in difficult, conflict-affected countries such as Zimbabwe, Somalia and Afghanistan, she oversaw programs that support major macro-economic reforms; provide for the critical needs and well-being of people in war torn environments; seek to enhance the private sector’s role in growth and job creation; and improve democratic institutions, governance and policies. The recipient of several Distinguished, Superior and Meritorious Achievement awards, Dooley-Jones was nominated for a 2023 Presidential Rank Award, the highest federal civilian award for "sustained extraordinary accomplishment."

Prior to joining USAID, Dr. Dooley-Jones worked as an architect in Philadelphia and for a number of non-profit organizations in Harare, Zimbabwe.

Dooley-Jones received a PhD and Master's degree in City and Regional Planning and a Master's degree in Architecture from the University of Pennsylvania, and a Bachelor's degree from Dartmouth College. She is a recently retired career member of the Senior Foreign Service.